Cannonau (or Cannonao) is the signature red grape of Sardinia. This grape really comes into its own when grown on the island’s granite soils. Across Italy, it goes by a number of names. In Toscana, Cannonau is known as Alicante, in Veneto as Tai Rosso and on the banks of Umbria's Lake Trasimeno as Gamay.

Cannonau in the Official Registry

The origins of Cannonau

DNA analysis shows that Cannonau is identical to Spain’s Garnacha Tinta. Until recently, the prevailing theory was that Cannonau was brought to Sardinia from Spain after Peter IV of Aragon invaded the island in 1354.

Some authors go as far as to say that Cannonau is 3,200 years old, which would make it the oldest red grape of the Mediterranean.

But, while the scientific debate goes on, one thing is certain: Cannonau forms an integral part of Sardinia’s history and culture.

Where Cannonau wine is made

Cannonau is the signature red grape of Sardinia. It’s the island’s most planted grape (29% area under vine), and produces over 10.5 million bottles of wine per year [2]. Rich and smooth Cannonau wine forms an integral part of the Sardinian diet. 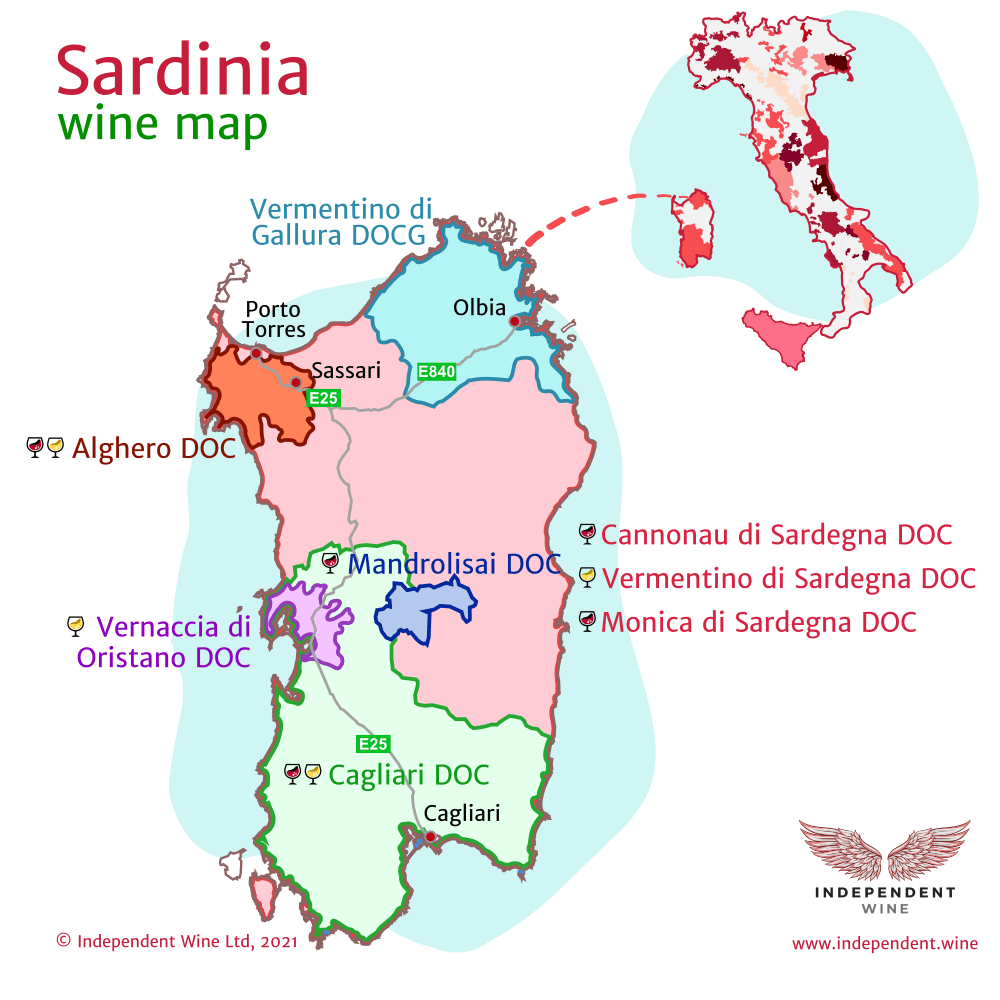 The appellation of Cannonau di Sardegna DOC covers the whole island. The rosso version has to be made with at least 85% Cannonau, which can be blended with other local grapes. Typical blending partners include Bolave, Carignano and Monica. To become Cannonau di Sardegna Riserva, wine needs to be aged for two years with six months in oak.

The Classico sub-zone produces some of the best expressions of Cannonau, which are flavourful and long-aged. The zone lies in the sparsely populated, mountainous area of Ogliastra on Sardinia’s east coast, around the town of Trotolì. Classico wines are aged for at least two years, including one in oak.

Cannonau di Sardegna includes three official sub-zones that all lie on the east coast: Capo Ferrato, Jerzu and Oliena. They are known to produce Cannonau wines with rich, concentrated flavours.

The Gallura area lies in the north-east of the island. Here, the subsoil is formed of pink and grey granite, and the topsoil is rich in granite sand. Gallura produces Cannonau in a range of characters, from fruit-forward and deep to elegant with a mineral core.

Mandrolisai DOC lies in the mountainous centre of the island, isolated from the influence of the sea. This area is known for its incredibly powerful expressions of Cannonau. The Mandrolisai blend is based on Bovale Sardo(Muristeddu), supplemented by Cannonau and Monica – Sardinia’s traditional red grape.

In Toscana, Cannonau is known under the name Alicante, and is considered a local grape. It plays an important role in Maremma Toscana. This area lies in southern Tuscany, between the Tyrrhenian sea and the extinct volcano, Monte Amiata. The climate here is dry despite its close proximity to the sea, as Sardinia diverts the wet air currents. The topsoil is rich in ferrous oxides, so has a characteristic reddish colour.

In other appellations of Maremma, Alicante is used as a minor blending partner with Sangiovese. Montecucco Sangiovese DOCG is a part of Maremma separated from Brunello di Montalcino by the Orcia river. The Montecucco Sangovese blend is based on 90% Sangiovese. Alicante, along with other grapes, make up the remaining 10%.

In Veneto, Cannonau is known as Tai Rosso or Tocai Rosso. This grape is planted across the region. It plays a very important role in the Colli Berici DOC appellation. This stretches over a group of hills that lie south-south-west from the city of Vicenza. The hills of Colli Berici formed on the bottom of an ancient sea, and they are composed of limestone and sand with lots of fossilised marine seashells.

Colli Berici Tai Rosso must be made from at least 85% Tai Rosso. Typical flavours include raspberry preserve with some spicy notes. The best examples come from around the town of Barbarano, in the centre of the area. Look for Colli Berici Barbarano DOC on the label.

The appellation of Colli del Trasimeno DOC surrounds Lake Trasimeno, in the western part of Umbria. Vines are planted on green, rolling hills composed of sandstone, marl and clay. The wines are labelled Trasimeno Gamay, and offer flavours of fresh red fruits.

It’s fair to say that Cannonau is widely planted across Italy. It can be found in various IGT wines, as well as DOC wines in Sicily and Liguria.

It’s possible that Cannonau is related to a red grape native to Marche: Vernaccia Nera. The village of Serrapetrona, in the foothills of the Central Apennines, is home to a distinct red sparkling wine: Veraccia di Serrapetrona DOCG. This must be produced from a combination of fresh and dried grapes, and offers aromas of rose, violet and dried fruits.

Cannonau is a beautiful grape with deep links to Italy’s history. Sadly, in the last 30 years it has been following the trajectory of other indigenous Italian grapes. Cannonau’s plantings have decreased by over 63%, overtaken by more popular international grapes.

Nevertheless, Cannonau is still one of the most important Italian red grapes, with a strong local and international following.