Chardonnay in the Official Registry

Registration Code: 298
Official name: CHARDONNAY B.
Official permitted synonyms: none
The grape has been registered in the official MiPAAF Registro Varietà since 1978. [1]

Where Italian Chardonnay wine is made

Chardonnay was barely known in Italy until the 1980s. This is a big contrast compared to French red grapes – such as Merlot, Cabernet Sauvignon and Cabernet Franc – which have played an important role in Italian winemaking since the 19th century. In many vineyards across Veneto, Lombardia and other northern regions, these French varietals replaced Italian native grapes decimated by phylloxera. Since the 1980s, Chardonnay has enjoyed a meteoric rise. Only Sicily’s Catarratto and Trebbiano Toscano are still ahead in terms of acreage. But this may not be for long. Chardonnay’s plantings grew from 11,773 hectares in 2000 to just under 20 thousand hectares in 2010. In the same period, Trebbiano Toscano’s area under vine halved, to slightly over 20 thousand hectares [1]. It seems that Chardonnay may jump to second place – if not the top position – very soon. The only two Italian varietals that may outcompete Chardonnay are Pinot Grigio and Glera, the no.1 grape in everyone’s favourite fizz: Prosecco. 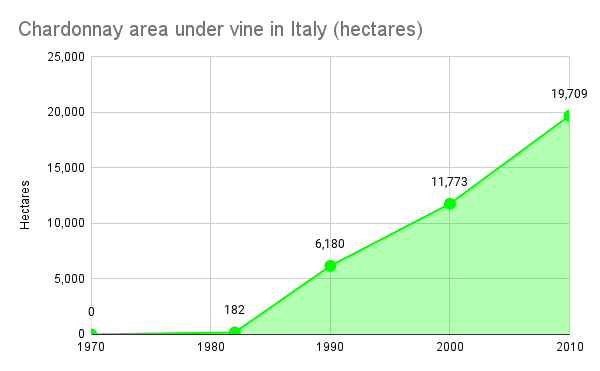 Chardonnay is an ubiquitous grape, found in wines across Italy. It plays the key role in Italy’s most premium metodo classico sparkling wines. It’s the dominant grape in Franciacorta DOCG and Trento DOC. Piemonte’s Alta Langa DOC, and Lombardia’s Oltrepò Pavese Metodo Classico are based on Pinot Nero, but Chardonnay is the main blending partner. Thanks to the sunnier climate, the best Italian sparkling wines have more natural sugar and need less dosage then their French counterparts.

Franciacorta DOCG is perhaps the most notable and successful denomination, entirely dedicated to top-quality (and very expensive) Chardonnay-based sparkling wines. Located south of the picturesque Lake Iseo and the southern edge of the Lombardian Prealps, it boasts 2,960 hectares of vineyards [2]. Most of them are devoted to Chardonnay, with a smaller proportion of Pinot Nero, Pinot Bianco and Erbamat.

Trento DOC is a sparkling-wine denomination located in the same province as Trentino DOC, sharing most of its territory. It has over 1,150 hectares of vineyards; some planted as high as 800 metres. Here, Chardonnay is the dominant grape – supplemented by Pinot Nero. A smaller share of plantings is devoted to Meunier and Pinot Bianco [3].

The north-eastern Alpine denomination of Trentino DOC is possibly the most successful producer. As of 2014, 26.8% of its vineyards were planted with Chardonnay, totalling a massive area of 1,900 hectares [2, 3]. Trentino DOC produces both youthful, fresh and fruity Chardonnay wines, as well as age-worthy versions matured in oak.

Alto Adige produces excellent examples of still, single-varietal wines labelled “Alto Adige Chardonnay DOC”. As of 2019, 570 hectares were planted with this grape, which is responsible for 10% of the region’s production [4]. Alto Adige produces Chardonnay in a range of styles: from unoaked, fruity versions for easy drinking, to premium wines aged in small French oak barriques.