Grillo in the Official Registry

Where Grillo wine is made

In the 19th century, Grillo became an important grape in Val di Mazara – Western Sicilia. It quickly gained a reputation for producing the best quality Marsala wine. In many cases, Grillo replaced Catarratto Bianco, which used to play the primary role in the blend. Marsala was a highly popular fortified wine during that era, and was a popular choice for long sea voyages. 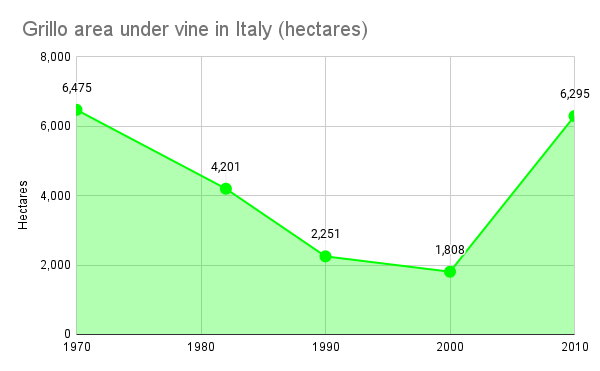 In modern times, the main source of high-quality Grillo wines is Sicilia DOC. This denomination was created in 2012 to replace Sicilia IGT. Sicilia DOC covers the whole island, and produces a massive volume of wine: equivalent to 95 million bottles per year (2019, [2]). Grillo is the second most widely planted white grape on the island, after Catarratto Bianco.

Sicily has made a considerable effort to protect the high quality and reputation of its Grillo wines. Before Sicilia DOC was created, Grillo was produced under Sicilia IGT. Due to the flexibility of these regulations, the quality of wines varied greatly. When Terre Siciliane IGT replaced Sicilia IGT in 2012, single-varietal Grillo wine wasn’t included. Rather, it was elevated to the more stringent DOC regulations.

Marsala DOC is Sicily’s famous fortified wine. The “gold” and “amber” Marsala is made from white grapes: Grillo, Catarratto, Damaschino and Ansonica (Inzolia). Grillo is not only an important part of the blend, it is also known to create the best Marsala wines. While Catarratto Bianco and Damaschino are the traditional elements of the Marsala blend, Grillo contributes body, texture, and higher levels of sugar. Ansonica (Inzolia) contributes perfume to the blend, but this grape only plays a minor role.

Marsala produces around seven million bottles of wine every year (2019, [2]) in several styles. Marsala Fine (matured for one year) is the most important style, accounting for 80% of production. Marsala Superiore (matured for two years) makes up about 20%. The next level is Marsala Superiore Riserva, which must be matured for four years. The most complex and authentic style is Marsala Vergine or Soleras. It must be aged for five years, and ten years to use the label Vergine Riserva or Vergine Stravecchio. This premium style is produced in very small volumes.

Other Grillo denominations have historic significance, but are much less important in terms of volume.

Mamertino DOC is located in Sicily’s north-east corner. Mamertinum was considered one of the best wines of the Roman Empire. This historic appellation was recreated in 2004 thanks to efforts by dedicated local producers. Two Grillo-based wines are produced: Mamertino Bianco (a blend of Grillo, Catarratto Bianco and Ansonica Bianca (Inzolia), and Mamertino Grillo-Ansonica (a blend of the named grapes). Production volumes in Mamertino remain very small (less than 100,000 bottles per year [2]).

Grillo is also permitted in a number of denominations of Val di Mazara (Western Sicilia) such as Alcamo DOC, Monreale DOC, Salaparuta DOC, and Erice DOC. The volumes here are quite small, too.

Overall, high-quality, DOC-level Grillo wine can be discovered only across Sicily. Outside of the island, Grillo can only be produced as an IGT wine in Basilicata and Puglia.